In 2015, we fitted fourteen Mountain Plovers with ~2g GPS loggers with hopes that they would provide clues about why some of these uncommon plovers come to breed in the high-elevation parkland of South Park, Colorado. At 9,000 feet, environmental conditions delay the breeding schedule in comparison to lower elevation breeding areas in eastern Colorado, Montana, Nebraska, and Wyoming. So how are plovers in South Park altering their annual phenology? 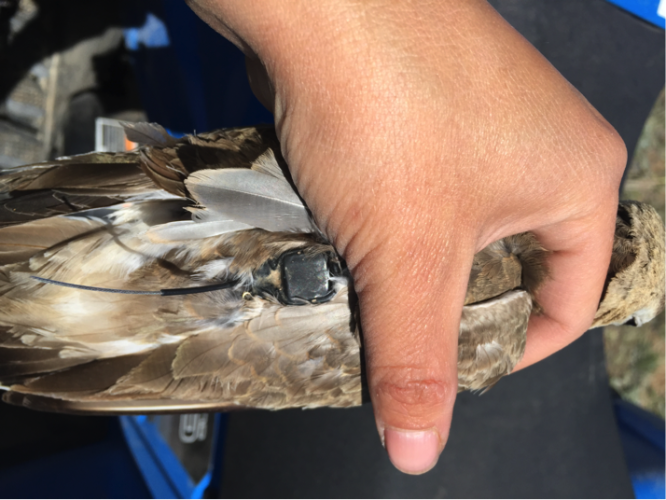 In 2016, we re-sighted 5 plovers with GPS loggers and recovered 2 devices. The loggers were programmed to collect GPS positions about every 5 days from August 2015 until May 2016. For the first time, we can take a glimpse into what these South Park birds were up to all year. By mid-August both plovers had left the grasslands in South Park for croplands in southeast Colorado and southwest Kansas. Following this stopover, one plover hopped down to Texas and the other hopped southwest near the Central Valley of southern California. This primary GPS data compliments our previous research on Mountain Plover migration using geolocators deployed on plovers from Montana which also showed a prolonged stopover near the borders of Colorado, Kansas, and Oklahoma prior to arrival to wintering grounds in Arizona and Texas (Pierce et al. 2017). Outside of their breeding grounds in South Park, it appears these two plovers heavily relied on agricultural habitats. This could have important implications for conservation surrounding land use and management if these individuals are representative of use patterns of the population. 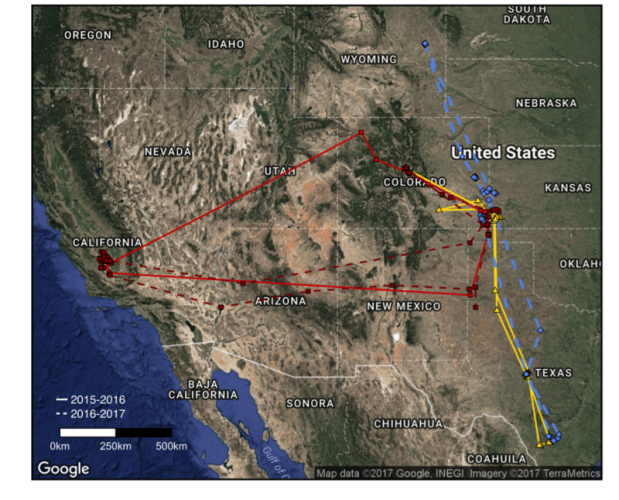 Both plovers returned to South Park in late April, almost a month later than when plovers begin to arrive on Colorado’s eastern plains. Average low temperatures in South Park during April and May can regularly fall below zero and spring snowstorms are not uncommon. How do plovers in South Park know when it is safe to initiate breeding? Interestingly, migration itineraries between the GPS tracked plovers from South Park and those tracked with geolocators from Montana were similar. Have plovers adapted their migration to coincide with resource timing altered by changes in elevation similarly to changes in latitude? Combined with what already know about plover migration, these preliminary tracks are exposing new exciting questions such as these that we hope to answer with continued and expanded research. Last year we deployed tags on plovers in Thunder Basin National Grassland in Wyoming in addition to continued deployment in South Park. This year we also expanded the study to include plovers breeding in Montana.

Both plovers we recovered tags from in 2016 were healthy enough to be fitted with new tags. This year we were lucky enough to recover one of them. This plover migrated to the same wintering area in California using almost the same route but did not migrate back to South Park on the same route between years. We also recovered a GPS tag from a plover in Wyoming that stopped in similar areas en route to Texas as our South Park plover. Recovery efforts are ongoing so stay tuned as we continue to unravel the mysteries of Mountain Plover migration. 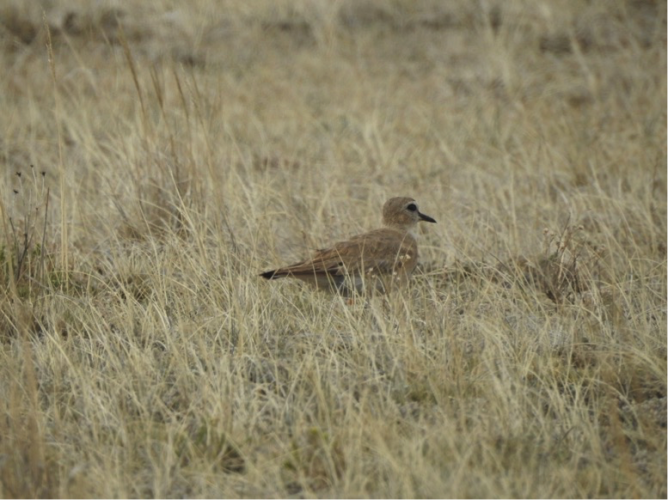 Mountain Plover with GPS tag antenna visible a year after it was attached. (Photo: Alli Pierce)

About the Author
Alli is a Ph.D. student in Integrative and Systems Biology at University of Colorado Denver. She is investigating questions about migratory ecology and population dynamics of Mountain Plovers at the continental scale. As part of this research, she is tracking individual plover migration movements using GPS data loggers in collaboration with the Migratory Connectivity Project and the Smithsonian Migratory Bird Center.
Social Share