During the summer of 2019, scientists from the Smithsonian Migratory Bird Center embarked on two expeditions to Alaska to study arctic-nesting birds as a part of the Migratory Connectivity Project. You can read about our first expedition here .

The primary goal of these expeditions was to continue a study of jaegers, a group of seabirds known as skuas outside of North America. Jaegers are aggressive but graceful and rarely visit land except to breed. Due to their oceanic habits, globe-spanning migrations, and breeding grounds in the Arctic, little is known about North American jaegers. 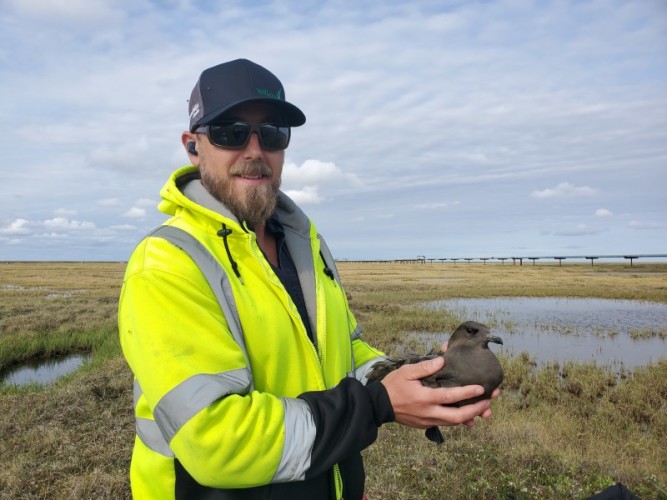 This summer, we expanded our study of Long-tailed Jaegers to include all North American species, including also Parasitic Jaegers and Pomarine Jaegers. We fitted the birds with small solar-powered satellite tracking tags to follow their movements, and in doing so hope to discover where in the vast oceans these birds find the resources they need.

We also contributed to a collaborative research study on the post-breeding movements and migrations of Alaskan shorebirds, led by U.S. Fish and Wildlife Service. We deployed small GPS tracking devices on two species of shorebirds, the American Golden-Plover and Red Phalarope. And their team helped with our study too, deploying two satellite tags for us on Pomarine Jaegers at their field sites.

Finally, the team hoped for an opportunity to retrieve previously deployed geolocators from Arctic Terns, the animal with the longest migration in the world. 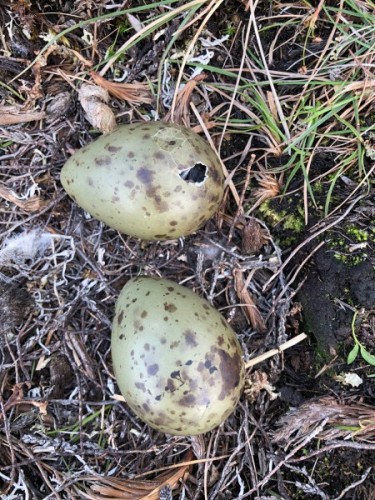 Parasitic Jaegers were well into their nesting cycle when the second expedition began. Their nests are simple depressions on the ground of the Arctic tundra, where one member of the pair sits while the other hunts for prey such as insects, small mammals like lemmings, other birds, and eggs.

With some sharp-eyed searching we located three nests, and were able to capture both male and female of each breeding pair, deploying satellite tags on all 6 birds. The team also looked for Long-tailed Jaegers, but we found that this species had already finished nesting, with the year’s young already active and exploring around the tundra. 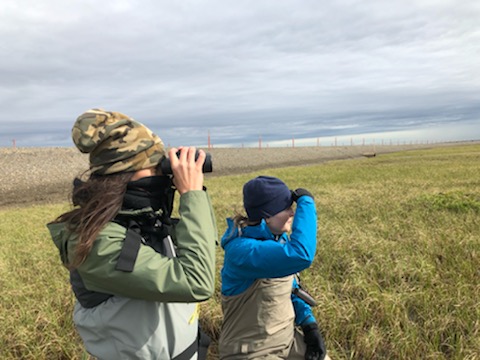 Amy and Autumn-Lynn search for nest 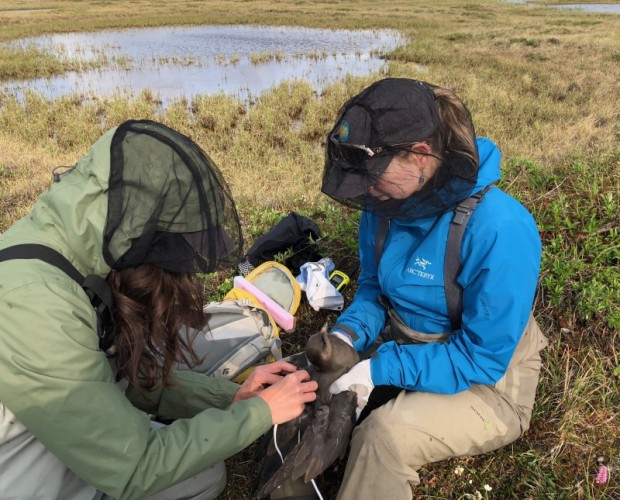 Autumn-Lynn and Amy attaching a satellite transmitter to a Parasitic Jaeger. Photo By Justin Harth 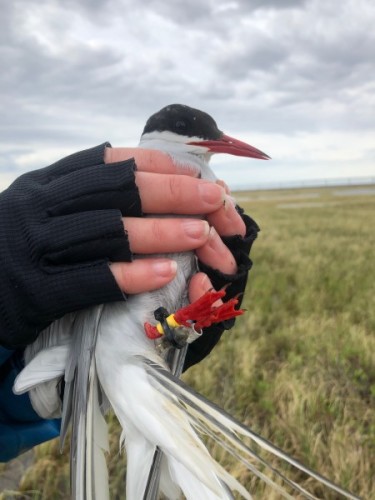 Geolocators are tiny devices that estimate a birds location based on light levels and timing of sunset. They can be incredibly small (1 gram or less) but need to be recovered from the bird to download the collected data. Efforts to retrieve tags from Artic Terns were hampered by late ice in 2018 which likely led many pairs to skip breeding that year since some nest sites were still ice-covered late into the season. With 2019 being a more typical weather year, the ice melted and we recovered 3 geolocators from terns.

We were now ready to go in search of Red Phalaropes, a dainty shorebird that could almost pass for a tiny seabird due to their oceanic habitats and marine migrations. On the last day of fieldwork the crew, along with our bear guard, was dropped off by helicopter at the USGS Colville River field camp, just steps from the Beaufort Sea and Arctic Ocean. 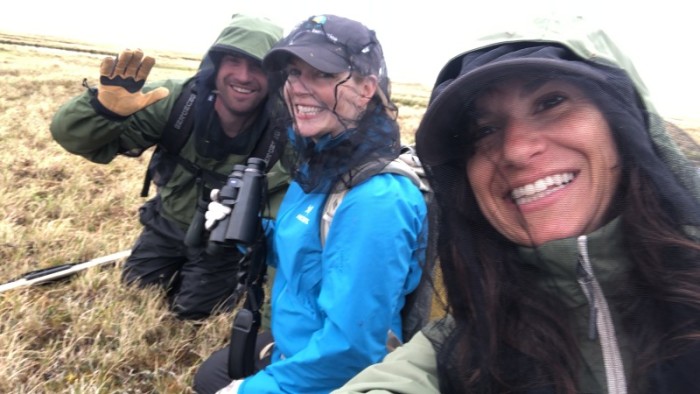 The USGS team was not operating the camp this season, but they provided amazingly helpful information about nest locations for Red Phalaropes from previous years. Apart from the camp structures (a Connex that stores gear, a couple of permanent platforms for science and cooking tents that are rebuilt every year, and a three-walled long-drop) there was nothing but tundra, geese, shorebirds, and billions of mosquitos around for miles.

How to catch James Bond: http://www.migratoryconnectivityproject.org/how-to-catch-james-bond/

After sparing a look for bears (a common visitor to the Colville River camp), we set off across the tundra to begin the search. Red Phalaropes are a unique shorebird that breed in the Arctic and spend the rest of the year on the open ocean. Interestingly, males of this species provide all parental care to the eggs and young. They nest in sedges and other damp habitats along the edges of tundra ponds and due to their small size among the tall vegetation, they can be very difficult to find. But when not on the nest, they can often be seen paddling along on the surface of the ponds and this gives us a big clue there might be a nest nearby.

After searching around scores of ponds through the thick blanket of mosquitos, we eventually spotted a Red Phalarope pair with newly hatched chicks and were able to capture the male and deploy a satellite transmitter. With this last goal accomplished, and a rain storm coming in, the team was ready to head home. 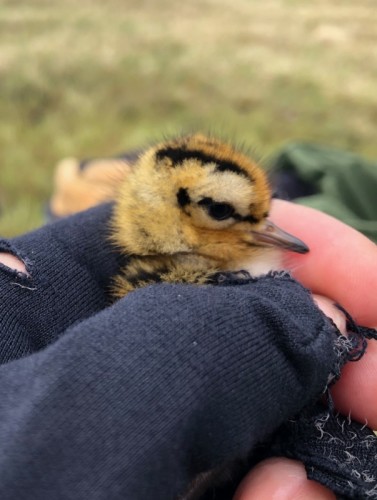 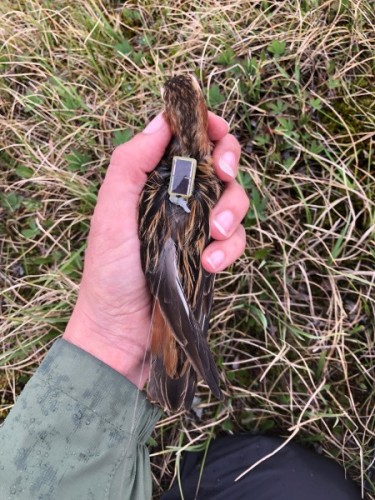 Now back in our offices, we can watch as the tags communicate with satellites and send us data on our birds’ whereabouts. As the summer draws to a close the birds will finish breeding and begin preparing for their incredible migrations. We look forward to what their movements might reveal.